Wish you a very Happy Advocates' Day wishes....
Hello All,

Advocates' day is celebrated in India by the lawyer community on the 3rd of December to mark the birth anniversary of Dr. Rajendra Prasad, the First President of India and a very eminent lawyer himself. Advocates' Day brings together labor officials, labor representatives, public and private sector managers, management representatives and labor relations neutrals from across the States and Territories to hear national and regional speakers addressing the key issues of the day. Dr. Rajendra Prasad (December 3, 1884 – February 28, 1963) was the first President of Independent India. He was an independence activist and as a leader of the Congress Party, played a prominent role in the Indian Independence Movement. He served as President of the Constituent Assembly that drafted the constitution of the Republic from 1948 to 1950. He had also served as a Cabinet Minister briefly in the first Government of Independent India.

He was born in Zeradei, in the Siwan district of Bihar near Chapra. His father, Mahadev Sahai, was a Persian and Sanskrit language scholar; his mother, Kamleshwari Devi, was a devout lady. He was married at the age of 12 to Rajvanshi Devi. His dauntless determination towards the service of nation impressed many prominent leaders of his genre who came under his tutelage. He passed in 1915 with a Gold medal in Masters in Law examination with honors and went on to complete his Doctorate in Law. Dr. Rajendra Prasad used to practice his Law and studies in Bhagalpur (Bihar), and was a very popular and eminent figure over there during that ceremonious era. Rajendra Prasad was greatly moved by the dedication, courage and conviction of Mahatma Gandhi and he quit as a Senator of the University in 1921 and was drawn into the Indian freedom struggle.

He was elected as the President of Indian National Congress during the Bombay session in October 1934 and took active role in meeting its objectives. After India became independent he was elected as the President of India. As the first President, he was independent and unwilling to allow the Prime Minister or the party to usurp his constitutional prerogatives. However, following the tussle over the enactment of the Hindu Code Bill, he moderated his stance. He set several important precedents for later Presidents to follow. In 1962, after 12 years as President, he announced his decision to retire and was Succeeded by Dr. Sarvepalli Radhakrishnan. He was subsequently awarded the 'Bharat Ratna', the nation's highest civilian award in 1962, the order which was established by himself, on January 2nd, 1954. Advocates' day is observed in India to commemorate his birthday. 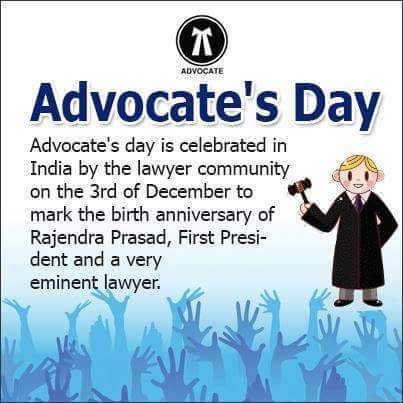